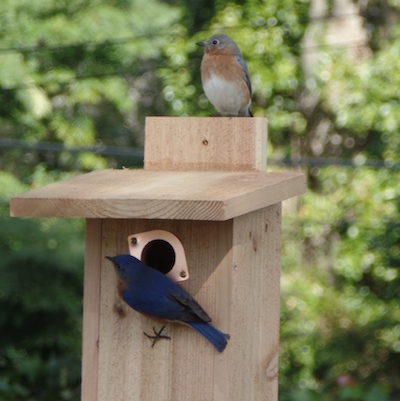 This season Florida Bluebird Society is pleased to be able to share the inside view from four active nestboxes,

Heritage Pines Bluebird Project in Hudson: Hope and Bob are the leaders on this project. They successfully streamed nesting activity last season. This year they have added an external camera so the activity inside and outside the nestbox can be observed nearly simultaneously. Watch the livestream on YouTube at this Link

JoanneQ in Jacksonville: This is a 2nd season NestCam. The camera is a Green-Backyard HD Bird Camera Kit using WiFi. Link

Fern in Wesley Chapel: Fern was the landlord of our first nestbox camera in the nestbox of Lucy and Orville. At the time, Fern lived in Tampa. Since then, she has moved to Wesley Chapel. A bluebird nestbox was one of the first things Fern installed in her new yard. Almost immediately a pair of Eastern Bluebirds claimed the new nestbox. That was last year. A nestbox camera has now been added to that box  and you can watch all the activity at this Link

PRC#33 in Penney Farms: This is a new nestbox located approximately 100’ from the site of an old nestbox that had been used for a number of years. The new box was installed in early January 2021. Within three days, a pair of Eastern Bluebirds, a pair of Carolina Chickadees, and a pair of Tufted Titmouses all checked it out. The Tufted Titmouses became the first residents. Following the successful titmouse fledging we had a pair of bluebirds take over the box.  Unfortunately that ended in disaster when a snake entered the box and consumed the bluebird chicks.  This year (winter 2022) a bluebird pair (presumably the same pair that used it last season) staked a claim on the box in early February. Nest building began in earnest on 2/23/22. They now have a well constructed nest with a perfect cup awaiting eggs.  Watch the live stream from this nestbox at this Link