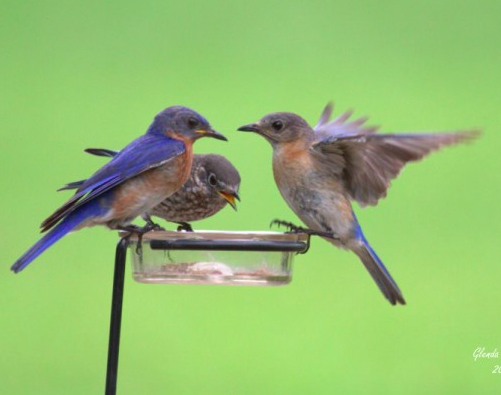 A record 864 bluebirds were reported seen in 52 counties during the Florida Bluebird Society’s 2015 Statewide Spring Blitz.

The count, taken from reports submitted to the FBS and from sightings reported on ebird.org, is 337 more than the previous Spring Blitz high of 527 reported in the 2011, the first year for which records are available, and more than double the 411 bluebirds reported during the 2013 Spring Blitz.

The Statewide Spring Blitz is held to help determine where bluebirds are found in Florida during the nesting season. The FBS also sponsors a statewide Fall Blitz in November in an effort to learn what habitat bluebirds use and where they are found during the non-breeding season.

Bluebirds were reported seen for the first time during either the Spring or Fall Blitzes in three counties. The counties and bluebirds reported were: Calhoun, nine; Holmes, eight, and Lafayette, 13.

No bluebirds have been reported in past years in either the Spring or Fall Blitzes in three counties – Broward, St. Lucie and Union.

Twelve counties which reported bluebirds seen in past Spring or Fall Blitzes, but from which no reports were received for the 2015 Spring Blitz were: Columbia, DeSoto, Glades, Gulf, Hamilton, Hendry, Indian River, Manatee, Monroe, Okeechobee, Palm Beach and Washington.